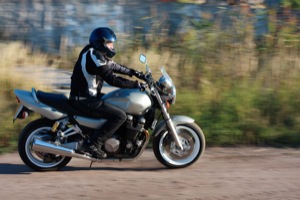 In 2007, 5,154 motorcyclists were killed in traffic accidents in the U.S., an increase of 7% from 2006. In addition, over 103,000 motorcyclists were injured. Many of these injuries and deaths could have been prevented if more motorcycle riders and their passengers wore helmets. Wearing a helmet lowers a motorcycle rider's risk of fatal injury by 37%. Despite the documented effectiveness of helmets, many motorcyclists choose not to wear them, especially when state laws don't require helmet use. Currently, less than half of the states require helmet use by riders of all ages. The National Highway Traffic Safety Administration (NHTSA) estimates that helmets saved the lives of 1,784 motorcyclists in 2007. And if all motorcyclists had worn helmets, an additional 800 lives could have been saved.

Per vehicle mile traveled in 2006, motorcyclists were about 35 times more likely than passenger car occupants to die in a motor vehicle traffic crash and 8 times more likely to be injured. While motorcycles made up no more than 3% of all registered vehicles in the U.S., motorcyclists account for 13% of total traffic deaths. In 2007, 36% of all motorcyclists involved in fatal crashes were speeding, compared to 24% for passenger car drivers, 19% for light-truck drivers, and 8% for large-truck drivers.

Under Virginia law, all motorists are required to drive at a speed that is reasonable or prudent within the speed limits posted, subject to a penalty of not less than five dollars for each mile per hour in excess of posted speed limits. Va. Code § 46.2-870. Also, any person who drives a vehicle on any highway recklessly or at a speed or in a manner so as to endanger the life, limb, or property of any person shall be guilty of reckless driving. Va. Code § 46.2-852. Any speed in excess of the following speeds is evidence of unreasonable driving:

In most other locations the Department of Transportation department may determine and declare a prima facie speed limit of 60, 55, 50, 45, 40, 35, 30 or 25 miles per hour, whichever it deems most appropriate.